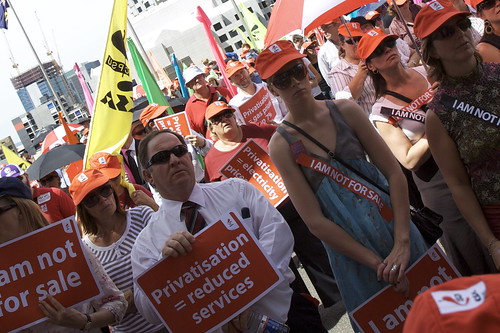 Well over 2000 public sector workers rallied at the Parliament of Western Australia on March 11, sending the Barnett State Government a clear message that they will not stand by while their working conditions are attacked.

The Community & Public Sector Union / Civil Service Association (CPSU/CSA) called the rally but unfortunately other public sector unions decided not to participate. While the rally was a good first step, it is important to recognise that one rally alone will not force the government to back down. Barnett has made it perfectly clear that, regardless of the anger towards his policies, he plans to proceed with his programme of cuts.

The main issues in the dispute are around attacks on permanency and the dispute resolution process. Under the changes whole functions of government will be privatised. Workers will be forced to accept wages on as little as 70% of their current level in addition to a reduction in conditions. Alternatively they will face the sack with no redundancy package or redeployment. Under the dispute process managers will be able to sack workers for alleged breaches in discipline with no need to provide evidence. This is aimed squarely at union activists who will attempt to organise resistance to the attacks.

What was clear at the rally was that the CPSU/CSA leaders appear to have already given up on winning. They seem to be hoping to negotiate a few concessions from the Barnett Government rather than putting up a serious fight. They clearly stated at the rally that they do not want to call any further action, in effect accepting defeat before the battle has even started! Further exposing the bankruptcy of these ‘leaders’ was the revelation that workers from the Australian Manufacturing Workers Union (AMWU) – who offered to send a delegation in support – were told to stay away from the rally.

Discussion is now taking place amongst workers about how to continue the campaign. Some workers are arguing that we should campaign for a Labor Government. Unfortunately a change of government will not result in greater job security or guarantees of conditions for public sector workers. The next state election is a long way off and any Labor government will not reverse the attacks. In fact, as the federal Labor Party have shown, they to are keen to cut expenditure in the wake of the financial crisis. Neither the Liberals nor Labor are friends of working people.

In order to defeat these changes it will take more than political lobbying and a ‘marginal seats’ campaign, something that the present union leaders fail to understand. What is required is a clear fighting strategy that draws together workers from the public and private sectors and the community at large. Only a fighting strategy that challenges the anti-worker policies of both major parties will be effective.

A broad campaign must be built by rank and file workers calling for an end to all public sector cuts. This campaign should call a special public sector delegates conference to plan the fight back. Workers need to push the campaign forward regardless of the position of the trade union leaders. They will either have to be pushed to do their jobs properly or pushed out of office.