A massive demonstration in Dublin last Saturday, called by the Irish Congress of Trade Unions (ICTU), attracted 120,000 people. The demo was in opposition to the policies which the Irish government is implementing in response to the unprecedented economic crisis ravaging the country.

It was overwhelmingly dominated by public-sector workers opposing the government’s move to slash their wages by the imposition of a ‘pension levy’. Firefighters marched in uniform. Teachers, nurses, civil servants, local authority workers were all in attendance.

Significantly, representatives of rank-and-file soldiers participated in the demonstration, something that clearly agitated the army top brass. The head of the armed forces felt compelled to say that soldiers would do what they were ordered to do.

This was in response to a previous statement from the soldiers’ organisation Pdforra, saying they would not do the work of public-sector workers who take strike action against the pension levy. Two organisations representing different sections of the Garda, the police force, also took part.

A month ago talks between the union leaders, government and bosses, to deal with the economic crisis, fell apart at the eleventh hour. That happened because the government put forward a proposal to impose the pension levy that at a stroke would slash the wage of an average public sector worker by 5%-6%.

On top of the attack on wages, the government has announced a €2 billion cut in expenditure this year, as part of a plan to slash €14 billion in spending over the next five years.

The economy is in free fall. It will contract by a further 6% this year, after a 3% contraction last year. Currently there are 327,000 signing on for unemployment benefits. That figure could rise by 150,000 this year and a further 80,000 in 2010. That would mean unemployment of over 500,000 or 25% of the workforce, reminiscent of the highest unemployment levels in the US during the Great Depression. 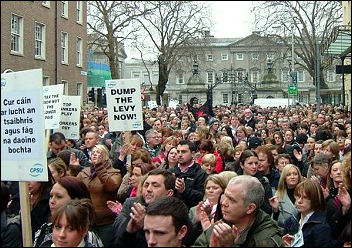 The government and the media are attempting to use the crisis in the private sector, where employment is collapsing, to justify its attack on the public sector. They argue that the whole of society, but in particular the “privileged and protected” public sector, need to share the pain now, so that the future can be brighter for all.

The anger of public sector workers at being, effectively, blamed for the crisis and attacked has exploded, and forced the union leaders to organise Saturday’s march.

The widespread understanding that profiteering by the banks and property developers, fully encouraged by the government, has played a key role in the collapse in the economy makes it much harder for this government to win support for its propaganda or for its policies.

The weakness of the unions’ position is shown in the case of the Waterford Glass occupation. Notwithstanding the workers’ action it seems likely now that the union, Unite, will go along with a buy-out by the US private equity company, KPS.

That would result in massive job losses, attacks on pay and conditions and poor redundancy and pension payments. There is a clear case for the nationalisation of Waterford Crystal and in reality the union should be stepping up its action and fighting for such a solution.
Pressure from ranks

While the union leaders have been forced to move against the government, they do not want to defeat this government. However, pressure from the ranks is forcing a whole number of public-sector unions to ballot for and organise industrial action.

Lower-paid civil servants will strike on 26 February. Dublin Bus workers will strike this Saturday against cuts in drivers and services, with even a section of bus workers due to take indefinite action from 1 March.

The ICTU was hoping that last Saturday’s mass mobilisation would force the government back to the negotiating table on the levy and other issues. It is prepared to sign up to a deal if it could get some concessions along with some measures to hit or curb the bankers and speculators.

It is possible that the government may make some concessions, which could bring the union leaders on board, while fundamentally continuing the attacks on pay and conditions. Any such agreement is likely to be short-term. The collapse in the economy means there will be no end of new attacks on the working class.

The social partnership between the government, bosses and the trade union leaders that has been forged over the last 20 years could be pulled apart quickly.

Notwithstanding the widespread anger and disgust, there is also a lot of fear about the economic situation and what the future holds and as a result there is also a hesitation at this stage amongst many about taking more significant or all-out industrial action.

Whatever happens in the next weeks and months, Ireland will clearly never be the same again. The attacks of the bosses and the government, the scandals involving billions in the banks and the redevelopment of mass mobilisations and struggle, are having a profound impact. Events are pushing consciousness decisively to the left and opening up major prospects for the building of a fighting socialist movement.